OR SORT OUR REVIEWS BY…

All photographs © Pamela Graham Photography for James vs. Burger and must not be used without prior written permission.

Tribeca describes itself as ‘the best little cafe in the world’ and is usually jam packed with customers no matter what time of day you visit. Once you step inside and let the atmosphere soak in, it’s not hard to see why.

The guys at Tribeca have carved out a little slice of New York City and brought it to Glasgow’s West End. From the huge American flag draped across the ceiling, the Manhattan artwork on the walls, the unmistakable yellow NYC taxi and NYPD cop cars parked outside, lively chatter of the patrons and the eclectic mix of music that help bring the cafe to life, you’ll feel like you are enjoying brunch in the lower east side of New York City as opposed to Glasgow’s West End. I have family in New York City and try to visit the Big Apple at least once every year. We miss it when we’re not there – the energy, the people and the fact that it doesn’t stop. It feels almost like a home away from home and it’s great to see the atmosphere of a New York City cafe recreated so well in Glasgow.

We had heard that Tribeca were offering up a burger to mark Usain Bolt’s outstanding performances at the Olympic games and since the games were coming to an end, we had to try it before it was all gone.

First of all, I have to comment on the portion sizes at Tribeca. If you are hungry or have a big appetite, this is the place for you. Tribeca offers up the biggest portion sizes that I have ever seen – America included! My jaw hit the floor when our plates were brought to the table and my first thought was that the menu should read ‘all burgers are served with a mountain of fries’, just to give people an idea of what to expect. Not that I was complaining! I was hungry and ready to eat!

As soon as I took my first bite of the Bolt burger, the first thing I noticed was the taste of the burger sauce that laced the toasted bun. Normally I would never compare any of the burgers that I eat to those served up in McDonalds, however the one thing I do love about a Big Mac is the frites sauce that comes with them. On my travels to Amsterdam, I discovered that McDonalds actually serve this sauce in small tubs for you to also dip your fries in – something I wish they would do here, and when I returned to the UK, I searched high and low for the sauce but was unable to find anything that resembled it here. It seemed that the only way to find it in the UK was by going to a McDonalds and ordering a Big Mac. That was, at least, until now. As I took a bite of Tribeca’s Bolt Burger, the taste of the burger sauce hit me like a bolt of lightening – it was just like the sauce I had taste before, only better. The sweet burger dressing was first to hit my taste buds, followed by the intense spice of the Reggae Reggae sauce and slight crunch and saltiness of the bacon. This was followed by the 8oz patty which was well seasoned, incredibly juicy and had a very deep beefy flavour to it which was made even better by the perfectly melted helping of American cheese on top. The beef tomato and lettuce on the bottom finished the burger off perfectly – not too much salad but not too little either.

What I really liked about this burger was the fact that it was a big, messy and equally tasty affair. I love when a burger is put down in front of me that makes me think ‘Oh my god!’ and this one did just that. I don’t believe that a good burger can only be made up of meat and cheese in a bun and it’s always good to see a chef get a little creative. There was so much food on my plate, that even after finishing the burger and half of the fries and salad, I still felt like I was sending back an entire plate of food almost, but this is what sets Tribeca apart from most other cafes that you’ll visit in Glasgow. Tribeca’s head chef David Horne describes their food as ‘very memorable’ and ‘in your face’ and it couldn’t be a more accurate description. The Bolt burger was big and the patty extremely juicy. The addition of the cheese, bacon and salad only helped enhance the intense beef flavour and the reggae reggae sauce was enough to give it a spicy kick without detracting from the overall taste. 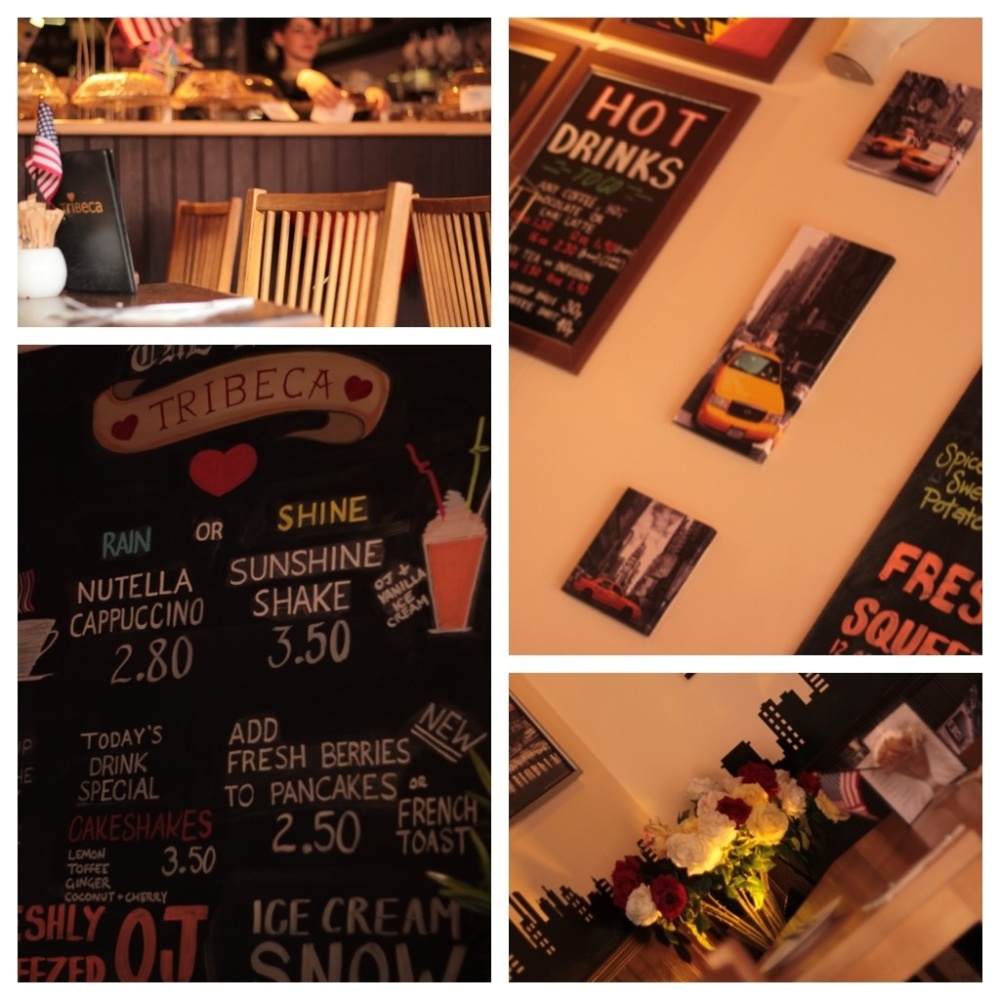 Tribeca’s burger was presented well, in a monstrous sized serving that will be sure to please any hungry eaters out there. There were a lot of flavours present, which worked well together meaning that I didn’t get tired of the burger and it was cooked very well resulting in the patty retaining a lot of it’s juices and not drying out any of the flavour. I only hope that they decide to keep this burger on the menu, despite it being made in honour of Usain Bolt. It’s certainly good enough to be a permanent feature. I would have perhaps preferred a sourdough bun, purely because it is simply my bun of choice and I feel that it would have contained the contents of the burger a little better. The bun used wasn’t the best, but it was at least toasted – just be prepared to get messy!

Tribeca is a great place to whittle away a few hours any day of the week. Whether you are stopping by for a burger, a huge stack of pancakes or just a coffee, it’s a little nook in the heart of the bustling west end that you could unwind in for hours. It does get busy and they don’t do reservations, so make sure you get down early enough for your table – the food and atmosphere are certainly worth it. Just don’t eat anything else before you go and prepare for the biggest portion sizes you’ve ever seen.

SUMMARY
+ HUGE portions.
+ Good value for money.
+ Good flavour combinations.
+ The burger sauce was delicious.
– Bun could have been better.
– Might be a little too messy for some.

Have you tried this burger? Did you love it? If so, vote for it in the ‘Glasgow’s best burger’ award by clicking here.

I write about food | Glasgow burgers | Check out my BBC Good Food Glasgow guide | Was once called ‘morally repugnant’ by a vegan. View all posts by James Lees