OR SORT OUR REVIEWS BY…

All photographs © Pamela Graham Photography for James vs. Burger and must not be used without prior written permission.

The first time I ate at a Smashburger was at Newark airport. Our flight was delayed and everyone was tired, cranky and hungry. At the time, I probably would have told you that the burger I was biting into was one of the best I’d ever eaten. That was many years ago. That airport Smashburger has since closed and looking back on it now, I’m not sure if the burger really was that good or if I had been so tired and hungry that anything would have made me weep with joy.

I’ve actually been looking forward to Smashburger opening in Glasgow for some time. It’s an American chain that I have fond memories of and I do love a smashed burger patty. Here in Glasgow in particular, I think it’s the best way to enjoy a burger. It’s becoming increasingly more difficult to find good quality, juicy burgers here due to the fact that so many establishments now have to cook their patties to the point where they resemble beef jerky more than they do a burger. Smashed patties are thin, light and for the most part, juicy. They aren’t usually cooked medium, but they’re so thin that it doesn’t matter. At Bread Meats Bread, for example, the best burgers on the menu are the ones that feature smashed patties. In fact, I would actually love to see all of the beef burgers on their menu use smashed patties. It just makes for a better burger experience in Glasgow right now.

Smashburger is located on Sauchiehall street and they couldn’t have chosen a better location in Glasgow city centre. It’s far enough away from the St Vincent Street burger quadrant that it doesn’t feel like yet another establishment is piling on to an already overcrowded area and it’s going to draw in hungry shoppers on Sauchiehall street. 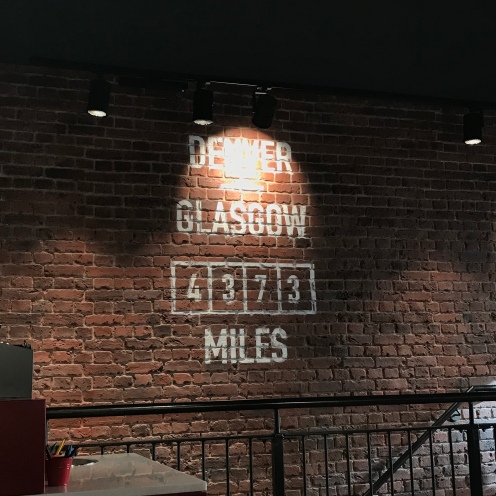 Inside, everything is red, white and exposed brick. There’s plenty of space over two levels and a good mix of large booths and smaller tables. When you arrive, someone will show you to a table but you order at the counter. Once you’ve decided on what you want, pop over to the counter, order and pay and receive a numbered table topper. Pop it on your table after you’ve paid and your food will arrive shortly afterwards.

There’s a set menu of burgers, but customisation is a big focus here. If you want to build your own creation, you start by choosing your bun type, then your patty and then further toppings. There’s loads to choose from so the possibilities are endless. Also on our table was a card for a limited edition ‘Triple Double’ burger. I was advised that it was basically a bigger version of the classic smash with double patties and triple cheese. And it seemed to be cheaper than lots of the other burgers on the menu too. I was sold!

Things were off to a great start. The fried pickles with ranch dip were excellent. Light, crunchy and tangy and not a soggy one in sight. To my delight, my better half doesn’t really like pickles, so I was left to devour the lot.

On to the burger, it certainly looked the part. Melty cheese, contents slightly flowing out of the bun and easy enough to pick up. Taste-wise, I was pleasantly surprised at how good it was. When you’re used to eating so many fantastic burgers in Glasgow, the arrival of another big chain doesn’t really leave you expecting a whole lot, but the smashed patties on the triple double were juicy, slightly crisp on the edges, well-cooked and tasted good. It’s not going to reinvent the Glasgow burger or anything and there’s plenty of other offerings here I’d rather eat, but it was one of the better burgers that I’ve eaten from a large chain establishment in recent memory. I’d definitely choose this over a thick, hockey puck-sized patty that’s bone dry. 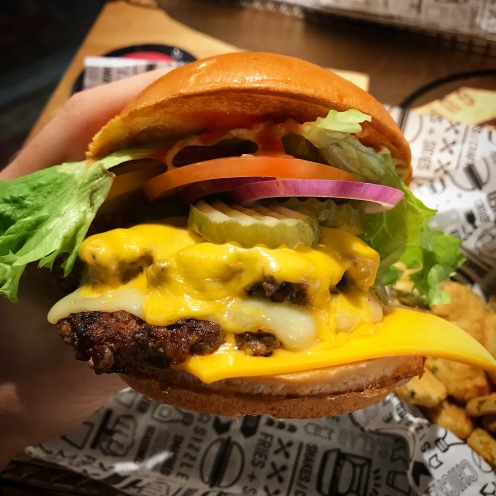 We were off to a good start, but that’s where the positives ended.

We also ordered the BBQ bacon cheeseburger but chose to customise it slightly. We subbed out the regular bun for a chipotle bun and ordered it with a side of smash fries, tossed in olive oil, rosemary and garlic.

Simply put, this burger was awful. The chipotle bun had a nice, subtle heat but the patty was bland, dry and overcooked. Compare this patty to the one that we had just eaten on the Triple Double and it almost felt as if they had come from two different supplies – or that one had been cooked hours ago and left under a sad heat lamp. This was the more expensive of the two meals, but I’ve eaten better late night Big Macs at McDonalds than this burger.

The smash fries were; however, quite good. I was expecting a basket of fries swimming in oil, but they were light, crunchy and the garlic really added a nice touch. 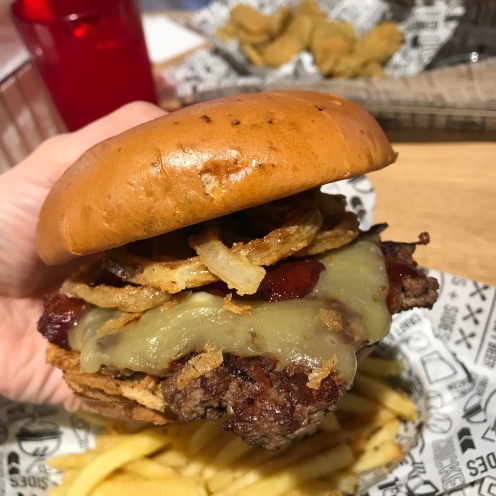 I’m not sure how Smashburger can get it right and so, so wrong at the same time, especially when the patties on both burgers are supposed to be identical. I visited on their second day of business, so perhaps it’s a blip. I’ll probably try it out again if I’m passing and really want a quick burger, but it’s not taking the Glasgow crown anytime soon. There’s better smashed burgers in the city. What’s interesting is that if I’d only ordered one of these burgers, this may have been a very different review altogether.

My feeling as I left was that Smashburger was, well, fine. There’s definitely a place for it. It’s in a great location, it’s reasonably well-priced and it’ll do well – but after one good burger and another absolutely terrible one, it’s hard to tell which one was the blip and which was the true reflection of the food there.

I write about food | Glasgow burgers | Check out my BBC Good Food Glasgow guide | Was once called ‘morally repugnant’ by a vegan. View all posts by James Lees